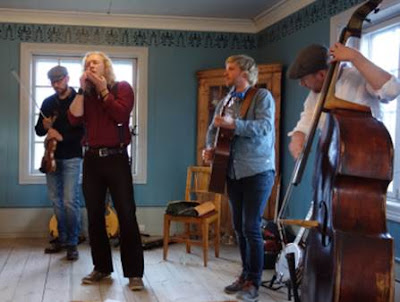 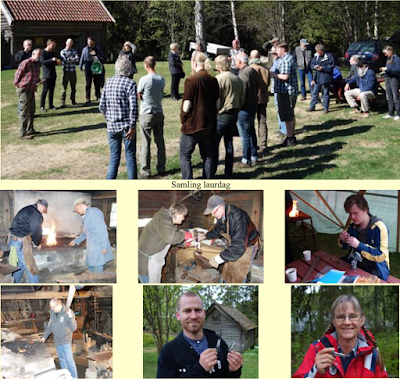 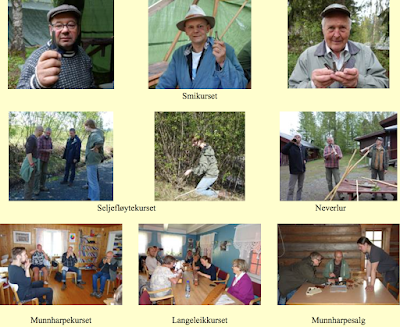 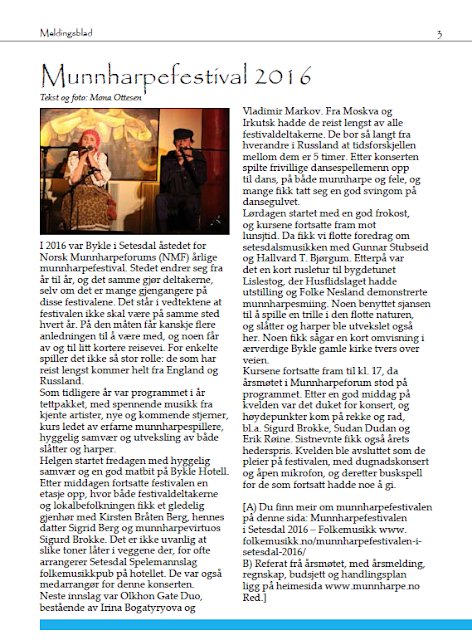 In 2016 Bykle in Setesdal was the scene of Norwegian Munnharpe Forum's (NMF) annual mouth harp festival. The location changes from year to year, and so do the participants, although of course there are many regulars. It's in the bylaws that the festival should not be in the same place every year. In this way, perhaps more people have the opportunity to join, and some may even have slightly shorter distances to commute. For some people that does not really matter: those who have travelled farthest come from England and Russia.

As in previous years the programme this year was packed with exciting music from capable artists, new and emerging stars, workshops led by experienced munnharpe players, pleasant company and swapping of both tunes and mouth harps.

The weekend started on Friday with pleasant company and a good bite at Bykle Hotel. After dinner festival continued one floor up, where both festival goers and locals enjoyed a meeting with Kirsten Braten Berg, her daughter Sigrid Berg and munnharpe virtuoso Sigurd Brokke. It is not unusual that such tunes resound in the walls because Setesdal Spelemannslag often organize folk music pubs in the hotel. They were also the co-organizer of this concert.

The next act was Olkhon Gate Duo, consisting of Irina Bogatyryova and Vladimir Markov; they had a very nice performance. Coming from Moscow and Irkutsk they had travelled the farthest of all festival participants. They live so far apart in Russia that the time difference between them is five hours. After the concert volunteers played to dances on both munnharpe and fiddle, and many had the chance to enjoy a good fling on the dance floor.

Saturday started with a good breakfast, and music courses continued towards lunchtime. Then we got a great lecture on setesdal music by Gunnar Stubseid and Hallvard T. Bjørgum. Afterwards there was a short stroll to the museum Lislestog where the Handicrafts team had an exhibition and Folke Nesland demonstrated munnharpe forging. Some used the opportunity to play a melody in the great outdoors, and tunes and harps were also swapped here. Some had even a brief tour of the venerable old Bykle church across the road.

The courses continued until five, when the annual meeting in Munnharpe Forum took place. After a good dinner in the evening it was time for another concert, and highlights came in a row, including Sigurd Brokke, Sudan Dudan and Erik Røine. The latter was also appointed Honorary Member of Norsk Munnharpeforum. The evening concluded as always at the festival, with volunteer concert and open mic, then late night jamming for those who still had something to give.